Getting in the Garden Groove with John Schroeder: Sequential Planting

Usually the third-earliest crop I get out of my garden each spring (right after the chives and asparagus start coming in) are radishes. I love eating different varieties of radishes on salads and as a snack with dip. And since my spouse doesn’t really like what the botanists call "raphanus sativus," I get to eat even more of those little goodies! But the spring season when radishes do their best passes quickly. I used to bum-out about having to wait another 11-and a-half months to get my next row of fresh tender radishes. That is, until I realized that I could put in another row or two in the late summer when the days shorten and the weather begins to cool. And that began my understanding that there are a lot of things I can plant more than once in a given season.

Vegetable gardening is basically composed of these elements; planting, thinning, watering, fertilizing, weeding and harvesting. But the longer I have gardened, the more I’ve come to view planting as on ongoing effort. It seems like every week to 10 days I’m putting in a half row or more of seed. I’m continually trying to “time” things so that I have a virtually constant supply of certain crops.

Cilantro is an herb that we use a lot in our home. While it grows very easily and effectively for me, cilantro pretty quickly GOES TO SEED (which is coriander, by the way, and I occasionally will harvest, dry and use that, too.) But I mostly grow cilantro for cilantro…so to always guarantee access to fresh young leaves I end up scattering at least a few seeds into different open spots of the garden about every two weeks. I usually end up purchasing 5 or 6 packets of seeds early in the year so that I don’t run out in the late summer when seeds can be hard to find.

I mentioned radishes. Those along with lettuce and spinach definitely all love cooler temps, so they all get replanted long about mid to late August, which depending on late summer weather factors can often give us a fall crop, too. Because of its longer growing cycle, I usually start a fall row of turnips (great to use in soups once the weather starts to cool) a bit earlier – say, mid to late July. I tend to do multiple plantings of kale and collards, basil and scallions throughout the growing season, as well.

It’s easy to forget when you have new seed in the ground, and if you’re not careful you’ll walk all over it. So I tend to always have some dried grass clippings available by the garden and when I do my sequential plantings I’ll scatter some clippings over the soil where the seeds lie. Having that visual trail reminds me where NOT to walk, and I believe that the clippings also help hold in the moisture necessary to get those new seeds to germinate. I do try to use grass that was not fertilized or treated with weed killer in the recent past, and I let it get pretty well browned from the sun before I put it on the seed. Decomposing plants (including grass plants) require nitrogen to break down. I’d rather not rob that from the soil where those new plants will emerge. Using mostly dead grass, from what I’ve read, helps prevent that.

ANSWERS TO LAST WEEK'S QUIZ: I took this photo after some early harvest activity. Did you identify everything from last week's quiz? 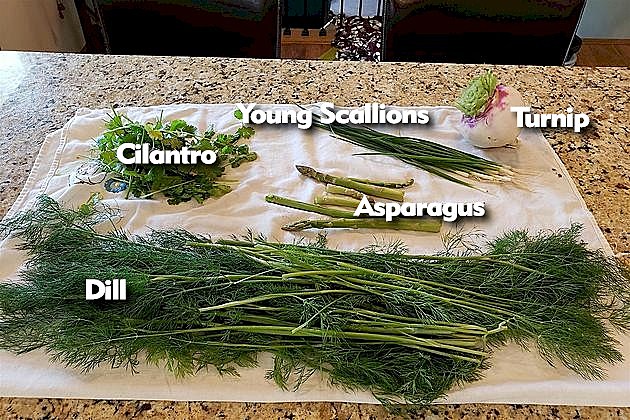 Next week: I NEED YOUR HELP...with spuds!

John Schroeder is a sales guy at Townsquare Media St. Cloud, but in his past life, he was an on-air personality specializing in sports. But what really turns his crank is getting out in his 28 x 15 foot vegetable garden several times a week nurturing, eventually harvesting (and sometimes sharing) homegrown food.

Enter your number to get our free mobile app

10 Commandments of Floating on a Minnesota Lake